Edmund was a private person off stage.  Once the costumes and make-up came off he liked nothing more than returning to North London to be with his family.  His marriage to Emily  Saxon bore four children:

Emily and Alice were born while Edmund and Emily were on tour.  Emily born in Blackpool and Alice born in Bristol.  The two boys were both born in London.

According to the 1891 census the two girls lived in Wellington Road, Hackney London with Edmund’s mother.  Unfortunately Emily Payne (Saxon), Edmund’s wife died in 1899 at the young age of 35.

In  March 1901 Edmund married Alice Mary Wyatt in London.  They started their married life in Clissold Road, Stoke Newington, London.  Together they had three children,

Edmund enjoyed the outdoor life as the picture's below show.  Gardening was a hobby of his.  I wonder if the tree he is planting is still growing?

It is not documented where or when these photo's were taken.

A good photo of Edmund, probably taken in the garden in his North London home. 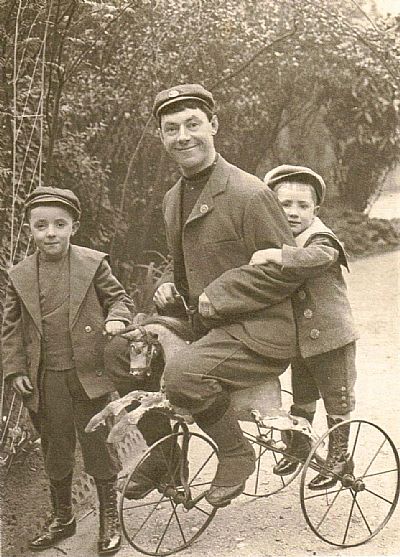 The 1901 census has Edmund and his family living at 16 Clissold Road, Stoke Newington, London.  It is also recorded that he had two servents living with them, Annie Saffell who was the housemaid and Millie Wikens who was a nurse.  Edmunds mother Eliza Payne lived next door at number 14.  By the 1911 census they had moved to number 4 Glebe Place, Stoke Newington London.  This was a very impressive house which shows he was doing very nicely.  Sometime between 1911 and 1914 they had moved again to a house in West Heath Avenue, Hampstead, North London.  This was, and still is a very affluent area.

During his lifetime Edmund was struck down by a few illnesses and accidents.  Whilst he was performing in 'The Shop Girl' he had been feeling unwell for about two weeks when he collapsed on stage.  He had been struck down by Typhoid fever.  He was nursed at home by a well known fever specialist call Doctor Robert Whairy and two trained nurses.  It was recorded that when he was deep in his fever he would fight Zulu's!  During this time he also had to go into hospital for an operation.  This saw him stay in a nursing home for about five months.  He was away from the theatre for about 15 months.  He also broke his leg on stage which took two operations to fix.  He was sent away to Norway to recuperate.

He took ill again during 1913 and had to miss performances of 'The Girl from Utah'.  When he did return the newpapers of the day announced

'Welcome back Teddy! How we have missed you'

Unfortunately 'The Girl from Utah' proved to be his last stage performance.  In June 1914 he became very ill.  On June 5th 1914 he had a serious operation.  He had been diagnosed with stomach cancer and they tried to remove a tumour.  The operation was not a success and sadly on the 1st July 1914 Edmund Payne died.

He was only 50 years old.  The theatre world was shocked and stunned.