Who Do You Think You Are - Gareth Malone 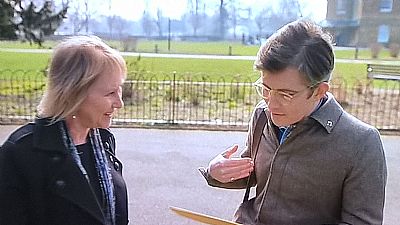 On September 10th 2015 The BBC aired an episode of Who Do You Think You Are featuring the choir master Gareth Malone.

For me it started in February of that year.  I was contacted by Adrian Barry of The Music Hall Guild of Great Britain and America to say the BBC had contacted him and did he have my contact details.  He passed them on to the BBC and they contacted me to arrange a meeting in London.  Myself and Matthew Neil, also of The Music Hall Guild, met the researcher in Charing Cross Hotel where it was disclosed to us that I was related to Gareth Malone and it also turned out that Gareth was Edmund Payne's Great Great Grandson.  To say I was surprised was an understatement.  They got lots of details and facts and other meetings were arranged.

The filming of my very small part of the episode took place in March 2015 at a very cold Clissold Park in North London.  I was very nervous but also very excited.  My part was to explain to Gareth some of background of Edmund and where he fitted in to the family tree. Gareth was as charming and as nice as he appears on the television.  He put me at ease straight away.  The highlight for me was when I talked to him about the short black & white film which Edmund appears.  "Have you seen the film" asks Gareth.  "Yes I have".  I then produced a copy of the film which Gareth was thrilled about.

The whole day was fantastic and I am so please to have found out that we are related and that Edmund's 'tah dah' genes have passed down the family.  Also the BBC gave me all the research material to add to my collection and one of the pictures is Edmund Payne holding a baby which is my Grandmother Mary Payne.  Priceless!!!!

I have now contacted Sian Malone (Gareth's mum) and we have now met each other.