Edmund Payne died on the 1st July 1914 at Rosslyn Hill, Hampstead, North London at the age of 50.  The news of his sad death was reported all around the world from New York to Australia.  The Daily Mirror devoted the whole front page to him, reporting his death and the headline read

His funeral took place on Saturday 4th July, 1914 at Abney Park Cemetery, Stoke Newington, North London.  A large crowd gathered to pay their respects to a much loved actor and comedian.  He was buried beside his first wife Emily.

The grave of Edmund

the restoration by The 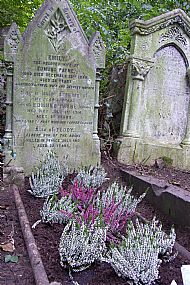 Barry for making this 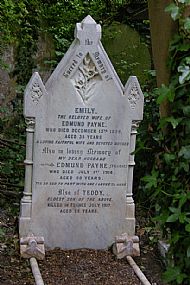 Edmund's grave restored in for the 100th anniversary of

Once again a massive thank you to Adrian Barry and

Matthew Neil from the Music Hall Guild of

Great Britain and  America for their fantastic work.

Photo courtesy of The Music Hall Guild of Great Britain

All photos are subject to copyright. Do not copy or reproduce without permission